The bus slowly drove away from our Wild West town, trundling leisurely down the dirt road, past the border without stopping… we were there! We’d made it to Brazil!

After a short while, the bus rolled onto the smooth tarmac of the Brazilian highway. The prairie landscape continued, and two hours later we entered Bagé.

It was late afternoon, but still hot and very sticky in the town centre. It could have been a town anywhere, with shady squares, old stone buildings, and modern, scruffy-looking department stores. We were relieved to get to bank machines and internet cafés, and found the coach ticket office.

We’d planned to head straight up north, cross-country, to go to the Iguaçu falls, but there was no bus route to take us that way. We’d have to go East, to the nearest big city, Porto Alegré, to catch a connection. With our bus leaving the next afternoon, helpful locals directed us to a cheapish hotel.

Our spacious room at City Hotel looked out over the hazy rooftops, and we were exceedingly pleased to take off our sweaty clothes, have a shower, and put on clean clothes for the FIRST TIME on our trip! It was the first time it had been hot enough to wear anything other than our only warm outfits. 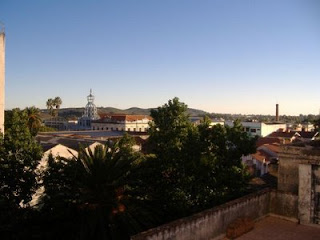 The view from our City Hotel window

We headed out for the evening, first of all stopping for a beer. We bought our drinks from a kiosk in a restful square, and sat at plastic tables. We were so excited that we were actually in Brazil, and the palm trees and warmth enhanced the satisfaction.

Bagé is a real backwater country town. Most people seem to be pretty impoverished, and we were very noticeable as strangers. Later on the trip, Brazilians were amazed that we'd been there (which made us feel like explorers, whilst they were just perplexed at why the hell we'd wanted to go there). We loved it. The locals were a colourful mix – not just in terms of the complete melting pot of Hispanic, white, black and everything in between, but also their clothes tended to be brightly coloured.

This is where we first noticed the female fashion for leggings (enhancing generally very large arses), teamed with huge, chunky platforms and piles of cheap bling. The large arses themselves are the fashion and without one, you just don’t have sex appeal. A couple of boys dressed like 50 Cent limped shadily about. Black and hispanicky-looking cowboys chinked around in their spurs, dressed in beautiful primary-coloured gaucho outfits.

I was mesmerised by the gauchos, who seemed to come from another world and era. Well they were mainly quite old, so sadly maybe Brazil is indeed loosing them to the past. But anyway, their fancy gathered trousers were tucked into knee-high leather boots, with immaculate shirts and string ties on top. Embroidered jackets and Brazilian cowboy hats finished off the look. Each cowboy had his own coordinated colour scheme.

After our beer, we walked around the town centre for ages, looking for somewhere to eat. There wasn’t much choice. There didn’t seem to be an eating out culture. We finally found a pizzeria, which was more expensive and clinical-looking than we would have liked. Bittencourt Pizzeria was empty when we got there, because we were rather early – we’d had a long day and hadn’t eaten since the border bread that morning.
The theme of the restaurant was that you pay one (big) price, and then you can choose whichever pizzas you want, or wait for the staff to come round with slices of all different ones. We thoroughly enjoyed gorging ourselves on the tasty pizzas, which were not amazing, but had been cooked in a proper pizza oven, from fresh dough. They served sweet pizzas for dessert. 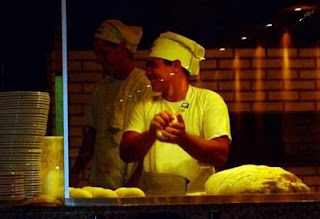 As the restaurant filled up with diners, I began to uncomfortably realize that although most of Bagé’s population was quite dark, everyone in the restaurant was pale. I started to feel like a stupid rich bitch just by being in there, and got quite upset about the striking race divides between rich and poor. I’d have to get used to this…

When we left the restaurant, it was dark, and the streets were buzzing with people. We walked back towards the hotel, popped in to the hotel bar for a couple of flavoured vodkas, and then strolled the streets to take in the lively atmosphere. Students were touting for cash for the new term, and gangs of kids hung out around little food kiosks that had set up along the pavements - this was the local eating out culture. It was our first evening in Brazil, and it seemed that Brazil was brilliant!

The next morning, we had a several hours to kill before our bus to Porto Alegré, so we had great fun drinking milky coffees in the square and discreetly taking pictures of each other in an attempt to snap the gauchos in the background – people kept warning us to look out for dodgy people (by tapping their noses and raising their eyebrows) – we were being watched, so we didn’t want to act like even more obvious tourists by asking the cowboys to pose for the camera. Actually, people were staring a lot, and we did feel like targets, but what could we do, other than be careful? 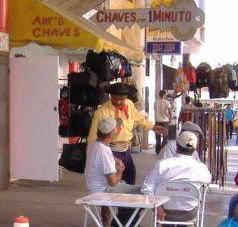 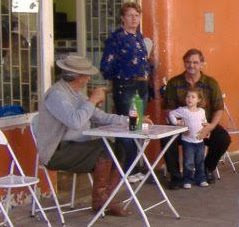 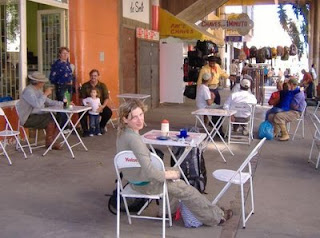 We bought some delicious rotisserie chicken to eat on the go, and caught a bus through dusty streets, to the coach station on the other side of the town. We sat in the 1st floor station café for about 2 hours, people watching. Kids carrying their school artwork, other kids being chased by security, dolled-up women, taxi drivers in vests…

We bought fruit (including the nicest mango ever in the history of the world) and water for the journey, and joined the bus queue/crowd.
Posted by Gemma Driver at 8:43 am