In case you don’t know, woodcock is traditionally served grilled on toast, and the guts and brains are eaten spread on the toast.

I had understood that something about the way woodcocks feed and digest makes their insides more edible than those of other species, but have been unable to find out exactly what that might be.

A kind client gave me a wild woodcock that he’d shot. I plucked it (inexpertly and possibly lazily, as you can see from the photo) and it felt really odd not having to gut it afterwards.

I didn’t have any decent bread that evening, so I split a wholemeal pitta bread and put one side in an oven dish, inside up. I then put the woodcock on the bread (beak under wing – again, a traditional thing) and put big wedges of butter over the bird, before cooking in a very hot oven, until crisp. I know, it looks like a horrible scorched alien foetus. It had been pretty and cute as a feathered corpse. 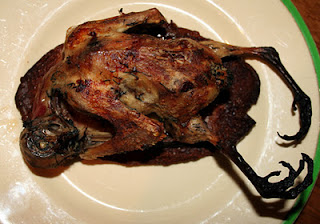 I dived straight in and attacked the flesh, which was unexpectedly solid. After a little nibble of the meat (very strong, dark, gamey and ‘ripe’), I broke the body apart and moved on to the guts before I could chicken out.

Having regularly come into close contact with the guts of other fowls, their smell and their contents, I was a quite scared of eating those of the woodcock. Especially as its squiggley intestines were white, like bird poo. (All other birds I’ve gutted had brown intestines. I’m not sure which is worse.) Would I be able to handle it? Would I have to admit weakness?

It was nice! Much more pleasant than my first taste of the woodcock meat! Relieved, I enjoyed all manner of its innards spread on the pitta, which had essentially deep-fried in the butter, so was exceptionally tasty. The only drawback was that I had to avoid lots of bitter blood - the body cavity was full of it, and the guts encased in it. The flavour of the intestines was like other delicate offal; sweetbreads etc. The heart, liver and other normal bits and pieces were the same as in any other game bird, but smaller.

With quite a bit of effort, I managed to crack open the head and was rewarded with a miniscule quantity of brain – so small that I didn’t bother with toast. It was creamy and nice as any brain should be. Only tiny. How does a creature manage to grow a beak, feathers, innards, skin, and fly, eat, nest, mate, lay eggs, incubate etc with the instructions from such a weeny brain?

Once I’d exhausted the guts and brain, I went back to the meat. Interesting! Mainly dark, densely textured, gamey meat, like tough wild duck. But there were also seams of white, extremely moist and tender meat, similar to rabbit.

I wonder how much woodcocks vary in terms of eating qualities?