I love mezcal/mescal - the smoky brother of tequila. I brought a bottle back from my June trip to Mexico, and it had a couple of worms in it. I'm fully aware that worms are passé for both mezcal and tequila, and are considered a gimmick for ignorant drinkers, but I chose this one for the bottle rather than the worms. I also didn't choose it for the little bag of chilli salt it came with, containing coloured industrial sodium chloride.

The one I selected from a mind-boggling range was the Don Lucio 100% agave, unaged. I thought the label looked nice, and made it appear that the producer cares about making a quality product, despite the worms and salt sack. 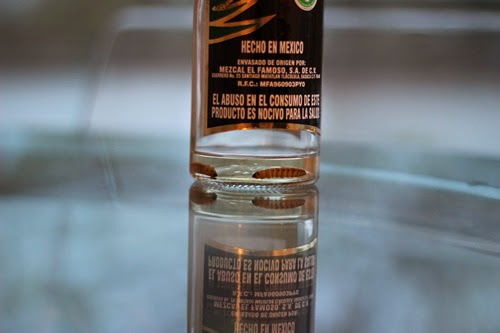 The mezcal within was very nice. Pretty smokey and leathery and probably more rustic than refined, but I really enjoyed it, and at least the agave content meant there weren't industrial alcohols added to it.

And I couldn't not try the worms, obviously!

They're apparently a recent addition, but supposedly add flavour, despite being already cured in alcohol before being added to the mezcal. The larvae used are often Picudo larvae, which are usually roasted and eaten as a seasonal specialty in Southeastern Mexico, so they can't be that bad, and call me odd but I do like the idea of roasted larvae. Most grub species that are used in mezcal live in the agave plants, and some can cause devastating damage to the crop, so putting them in booze and then eating them is some kind of revenge. I was unable to identify the exact species in my mezcal so can't give you more details on that. Anyone know? 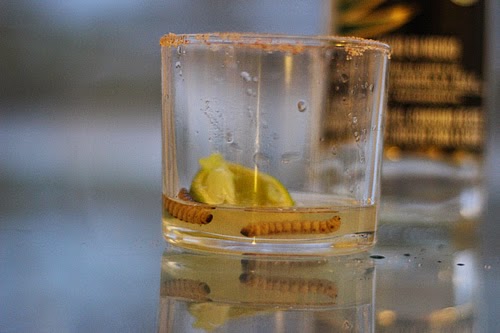 The urban myth of hallucinogenic qualities is just that, and I doubt any variety of caterpillar used in mezcal has mind-altering properties other than it being mainly made up of alcohol by the time it's consumed.

Verdict: No flavour whatsoever. Barely enough texture to be exciting or disgusting. Got the willies a bit when I was holding a worm and biting into it, so that provided a bit of fun - I actually imagined the thing moved! It was like biting into an undercooked french bean or chewing on a bit of connective tissue. Quite chewy but not difficult to swallow. Not unpleasant but not enough anything to be pleasant either. In short, this was a pointless exercise gastronomically, but satisfied my own curiosity. I ate both worms as I can't bear to waste 'food', but they would be far nicer fried up with some garlic and salt than pickled in mezcal. I can't imagine they give off much flavour either, but would love to taste a before-and-after. 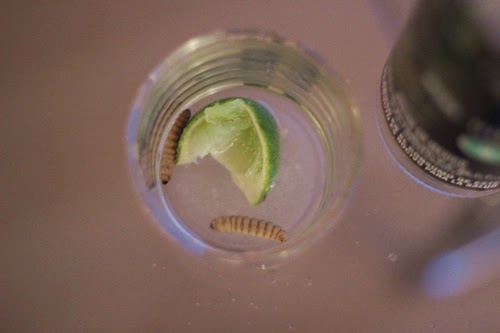 Posted by Gemma Driver at 4:51 am No comments:

I moved to East Dulwich about a year ago and have been exploring restaurants here and in Peckham, with the help of Jay Rayner and Hollow Legs. Here are a few mini-reviews:

I thought this was just a cute pub until a friend suggested eating here the other day. In the back is a cosy restaurant with open kitchen. Fantastic and imaginative seasonal menu, great cocktails, inspiring wine list. I had rolled spleen (rich and almost creamy - delicious!) with pickles followed by roast partridge (crispy feet but still slightly pink inside - perfect), cavolo nero and wild mushrooms. My friend had prawns with aioli followed by the partridge. The prawns were exceptionally sweet and delicate. It was all like home cooking with the best possible ingredients. Starters around £8, mains £15 - £22, cocktails £8.

A very over-priced French bistro. I realised when eating their very nice food that most people in there were on Groupon deals, so always get a voucher if you want to try this place. With a voucher, the price is about right. The food is good but nothing amazing - standard bistro fayre like pâté with garnish and moules. No problems, really nice dining room that used to be a butchers, but felt a bit ripped off.

This place is rammed with clutter and chintz. Awful taste in terms of decor. Lots of memorabilia on the walls about the restaurant having existed 20 years or more - clearly they haven't decorated since then. BUT the food is good. Presentation of dishes is as dated as the decor, but it tastes good. It's got a cosy atmosphere, with friendly service, reasonable prices and wine in carafes - ideal.

Several more reviews on the way...
Posted by Gemma Driver at 8:07 am No comments: