We arrived late at night. Having phoned various guidebook hotels from Bagé, we were a bit worried about finding somewhere to stay - the places we'd called were either full or very expensive, and we had no idea how to find our way to the different areas of the city. We should have looked around at least a little bit, but we just went straight to the crap, over-priced dump over the road from the bus station. 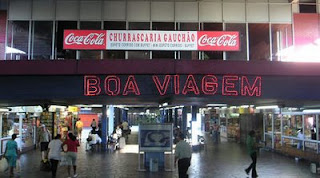 The greasy, string-vested man behind the desk gave us the key, and sent us up to our hovel. The sheets we were supplied with were worn so thin, that once we had put them on the narrow beds, you could see through them to the dirty bedding beneath. The dusty window over-looked a filthy alleyway, and we left it open due to the strong smell of gas in our room, that made us fear for our lives. We could hear shouting coming from everywhere, and the hooting cars on the road out front sounded like they were in the room with us. The light in the cold shower was activated by a switch that was located under the stream of water. Nevermind, we did find the room's ridiculousness quite funny, and we did manage a couple of hours' sleep.

Sadly, we were unable to take photos of the ‘hotel’ room, because it was so small, and the shower at such an awkward angle, that our standard-lensed cameras couldn’t capture the fun.

After breakfast, we went straight to the bus station, super-early, to find out about coaches to Foz d’Iguaçu, and buses to the pretty wine-producing villages that we’d heard about in the Porto Alegre area. We bought our tickets to Foz for early that evening, so that we could briefly explore the surrounding villages before leaving, without having to stay an extra night. But then the ticket seller noticed that we didn’t have visas. We were illegal immigrants, due to having crossed the border in the middle of nowhere. We had to go to the airport to explain ourselves and get a stamp, or we couldn’t travel.

Luckily, the airport wasn’t far, and the customs man only gave us a gentle interrogation, but by the time we got back, we were too late to take a trip into the countryside and get back before our Foz bus. We had to miss out on seeing the vineyards and amuse ourselves in the city, and, after BA, we had intended to avoid metropoli. But after a horrible, watered-down, sugary fruit juice in the bus station, we put our rucksacks in left luggage, and began to tramp the town. We were determined to make the best of it. For a few hours. Until we were utterly wilted by the awfulness of Porto Alegre. 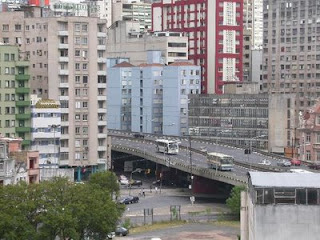 Don’t get me wrong; as with Montevideo, I am sure that given time we would have uncovered many more hidden joys of the city, but our brief experience did not do the place justice (I hope). It was hot, sticky and filthy, impoverished and falling down. We walked past crumbling whorehouses (it was the houses that were crumbling not the whores - the young prostitutes seemed quite spritely, despite their rank living conditions) and charcoal-grey gutter kids lying ignored and unconscious on the pavement. Shops consisted of tatt-touters, selling useless Chinese junk. Obvious Criminals, who happened to be blond and blue-eyed, thought they could gain our trust through colouration and offers of ‘help’. Most people were over-weight to obese levels, and the only food we found was brown and deep-fried, whether it was sweet or savoury. The leggings and platforms were out in force, to accentuate the eye-watering arse sizes. Huge skyscrapers lay derelict, right in the city centre, looming over the shops and stalls. We completely exhausted ourselves trying to find something nice. 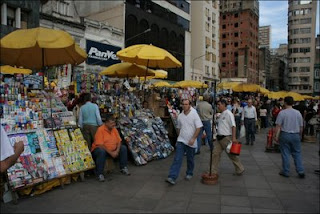 Thankfully, we actually did in the end; We found the excellent covered market, with amazing street performers doing somersaults through rings of fire outside. We couldn’t take photos, for fear of being mugged. There were pavement cafés along one outside length of the market (Ahhh! Beer! At last some decent refreshment!), fish stalls lining the outside of the port side, and all sorts of food stalls inside. I’d forgotten that Porto Alegre has a port until I was standing next to it!

We found a restaurant in the market, that reminded me of a Spanish taverna, with its high, tobacco-stained walls, busy waiters in aprons, dark wooden tables and locals enjoying leisurely meals together. Bar Naval serves beer on tap and has a very accommodating service.

Some handily English-speaking men on the next table tried to chat us up, to the amusement of the waiters. The pleasing result was a lot of help with the menu and a recommendation of what to do for the rest of the afternoon, and directions to the city’s massive Redenção park.

The food was comparatively pricey but very good indeed. And it was real food rather than deep-fried dough. We sampled some Brazilian delicacies, tasting a rich, smoky bean feijoada, with farofa (course cassava flour which soaks up and thickens sauces, and adds flavour, crunch and calories) and the fantastic acidic, firey and salty chilli sauce (Anyone know where can I buy this in the UK?). Some spice was very welcome after what was beginning to feel like days of bland stodge. We subsequently realized that the flour and the chilli sauce are permanently on almost every dining table, especially further north. 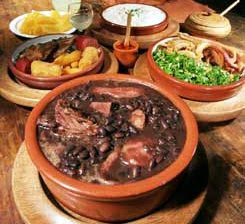 Feijoada & all the trimmings

The feijoada was like a rich, dark, smoky cassoulet, that contained black beans, smoked pork belly, beef, smoked sausage and what seemed to be an unsmoked sausage with a bone running through it – all absolutely delicious, and served with refreshing slices of orange, crisp salad, rice and greens. I tried to establish what the tender greens were; they’re called ‘couve’, but translations vary from general brassica to cabbage to kale. Kale seems most likely. We also had some delicately fried flat fish and a few chips! Cool lager washed it all down nicely.

We still felt like we were being watched and scoped out from afar, so still no photos, I’m afraid.

Back out into the hazy sun and humidity (smog, maybe,) we began once again to navigate the grimy streets and fried food stalls, until we found the park. What a relief! We spent a couple of peaceful hours watching families and groups of friends playing sports, walking dogs and drinking maté. There were also caged enclosures down paths, among the trees, which housed monkeys and exotic birds. 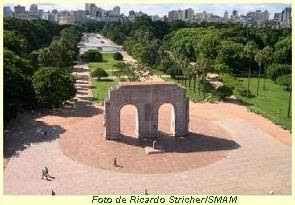 Finally, feeling exhausted, sweaty, filthy and greasy, we found our way back to the bus station, and caught our overnight coach to Foz.

N.B. As a big exception to my general blog rule, the photos in the post are not mine. While I was searching for them on the internet, I did find some very pleasant looking pictures of Porto Alegre, so maybe we just caught it on a bad day...
Posted by Gemma Driver at 10:31 am