Turkey's been in my top five to-visits for years. I was booking extremely last minute, but was still adamant I didn't want to be in a tourist trap, so I avoided places like Marmaris. Our hotel was described as being in smaller resort, outside Marmaris. I looked on the map and it seemed suitably far away from the tourist centre, at the other end of the bay.

But Marmaris is a hideous sprawl that has enveloped the whole area. This wasn't Turkey, it was Blackpool in the sun.

Our hotel was really nice and super-clean. The rooms are formulaic but well-equipped and the views are stunning. It's right on the (crappy) beach. But the food was really bad, with lots of cheap, processed stuff, including loads of (turkey?) fat pretending to be pork with the use of bright pink colouring and frankfurter flavouring. We don't require pork, you know! Especially fake pork. Instead of pretend bacon, we'd love to try traditional Turkish preserved meats and local cheeses, please. 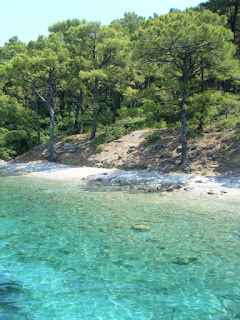 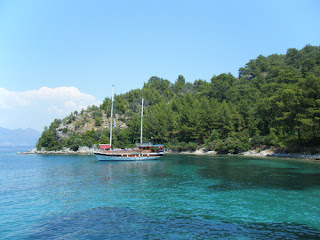 Desperate to find some real Turkey, we went to the old town harbour area. The beautiful old buildings along the port have all been turned into bars and restaurants and are ALL adorned with flashing neon lights, and have annoying waiters standing outside, hassling you to eat at their restaurant. My other half is black and the hasslers kept shouting "Eddie Murphy!" and "Denzel Washington!" at him - needless to say, he doesn't look anything like either of those stars and I found this intensely irritating, but he tolerantly said that they're just trying to do their job and be friendly. Anyway, there were literally no local-type restaurants in the whole place, which I found so depressing that I actually cried, causing an argument with my parnter.

So we kind of gave up on the food/culture front, and frequently ate at the same tourist restaurant - Three Brothers - that sold decent food (some authentically Turkish) and fabulous rum-soaked fruit slushies. They also had a beach with loungers, on which to enjoy the boozy slushies.

We did go on a nice tourist boat trip to bays with crystal clear water. We also hired a speed boat, which was a laugh. We tried the Fly Fish (I think they mean Flying Fish) watersport, which was a brilliant fun and left my forearm muscles in pain for days afterwards, due to having to hang on for dear life. You get propelled METRES into the air on the inflatable raft thing, pulled by a speed boat (Pic to follow shortly). 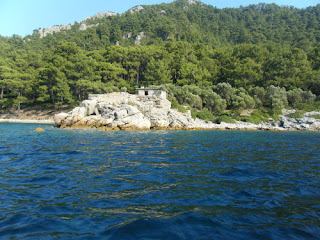 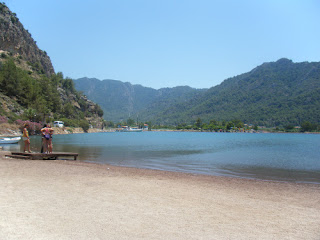 The best bit of the holiday was when we took a taxi up into the hills and saw some real countryside and villages, and the beautiful Turunc woodland waterfall that was deserted until just as we left and dozens of 4x4s packed with a tourists rocked up. Glad we didn't go on that organised 'safari'! The waterfall cascades over several small cliffs and feeds lots of little irresistibly clear pools - we had a few refreshing dips.

We stopped at the roadside on the way back for whole chicken cooked over a wood barbecue. The taxi driver nipped down the road to buy us beers as the restaurant didn't sell booze. The fire was stoked, and the chicken was cooked inside a big can. It was skewered onto a dish where potatoes, peppers, tomatoes etc cooked in the chicken juices.

We sat at plastic tables and chairs - always a good sign - while the woman who seemingly does everything brought bread, thick yogurt, raw green chillies and delicious chunky tomato and cucumber salad. Her family chilled out at the next table. We gulped beer while we waited for the chicken, amazing smells of woodsmoke and roasted chook making us madly ravenous.

Jeeeez it was good! We managed to eat almost the whole chicken between the two of us! We could hardly walk afterwards but we couldn't leave any of that meat could we? The food was relatively expensive, as it's charged per chicken not per person, and I guess one chicken would normally serve at least four. It was about £20. The best money we spent that trip. 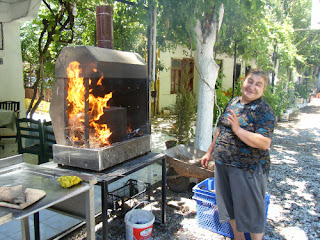 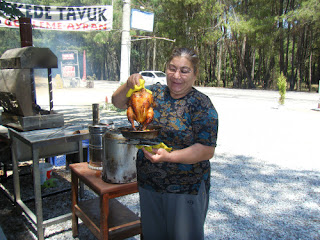 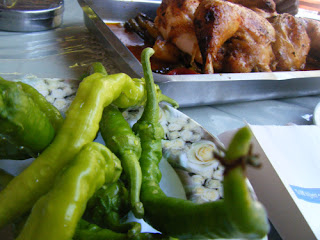 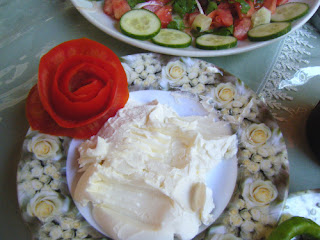 During the meal the man of the house brought us some ancient photo albums to peruse. These mainly-'80s photos seemed to be largely of him in his chef's gear (various styles of mullets and huge taches) and family gatherings. We dutifully looked through and commented. Quite an amusing thing to happen! Not sure whether every customer is treated to this or if we were 'specially selected, but we loved it anyway.

Another funny thing was how we came to eat at the restaurant in the first place: We said we wanted to eat so the taxi driver immediately pulled over to a crappy place at the side of the road. Now I love roadside eateries, like those I wrote about in Tunisia and Croatia, or old school 'frites' stands in France. But we'd just seen some pretty villages with tiny part-time restaurants that I was dying to try, and this place was basically a kiosk. I said, "No - village?". The taxi route we were on was called the 'village tour', so I thought he'd understand 'village'. He said, "Ah yes, yes!", did a speedy u-ey and pulled up at a café 200m back the way we'd come. I said "No - village?" a few times and he said "yes" a few times, until I noticed the wood-fired barbecue and pretty much leapt out of the car. It seems 'village' in English sounds a lot like 'piliç' - chicken in Turkish.

Posted by Gemma Driver at 3:04 am No comments: