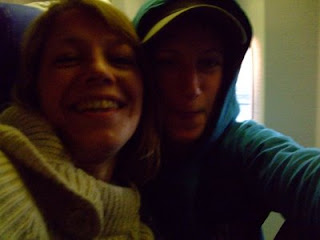 After an eleven hour flight from Madrid, we landed in Buenos Aires late afternoon, to start begin our adventure...

We caught bus from the airport, across town, getting out and getting lost halfway to change buses. Scabby looking grassy ‘parks’ with kids playing football, stray brown dogs everywhere, districts of street sellers, and busy high streets. Nothing glamorous so far, and the Don Sancho Hostel was in dodgy-seeming back streets, with pavements covered in dog shit and broken slabs. The beds looked filthy, but the threadbare sheets were clean, and the inmates friendly. 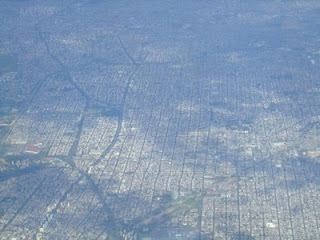 The incredible view of the grid layout of BA and most other South American towns - we hadn't even heard about it before.

We showered and found our way through the dusk and trams, to an Italian bar, and sat outside to drink a litre of beer each. We didn’t realize that people normally share these large bottles. It was quite cold, but the chilly breeze would probably seem warmer during the day. We moved on to a restaurant selling local specialities (Pan Y Arte, Bar Resto, Boedo), which we had heard all about from an Argentinian student, who we had cross-examined on the plane. But the food was rather stodgy, not very exciting, not warmed right through, and all seemed to be based on the Cornish pasty (e.g. empanadas). Not quite the amazing Argentinian steak I had been salivating in anticipation of. The wine was good, though – Santa Julia 100% malbec, with blackberry, blackcurrent and violet flavours.

We shivered briskly back to the hostel.

Next morning was a delight! We got our coffee, bread and dulce de leche (or confiture de lait - the condensed, caramelized milk, that you would use for banoffee pie), and took them into the sheltered terrace area of the hostel. We managed to find a seat at the top of some steps, where we could soak up our first South American rays of sun. They were lovely and warm, and we felt that we had definitely ‘arrived’. 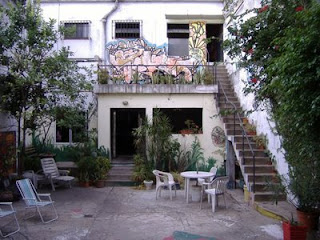 The terrace - where we had our first South American sun.

But out of the sun and shelter, the streets were damned cold! We only had one set of warmish clothes, which we had travelled in, so we started to feel a bit skanky. We trudged the streets, trying to avoid the shit, and bought little savoury pastries, from a fantastic bakery, and enjoyed them with a beer at a pavement café. The weather was closing in, and we wanted to see some of the glitz and grime that everyone seems to love about BA. We asked a local-looking girl who turned out to be a Londoner. She said that she hates the city, and is only there for the tango, but that there is one sight worth seeing; the massive cemetery. We found it on the map, and began the very long walk to get there. 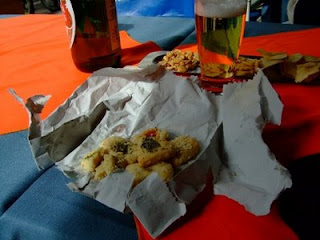 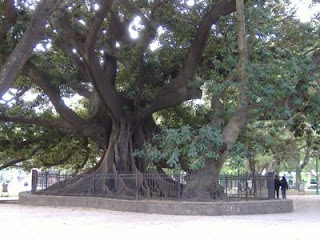 The cemetery was indeed incredible. 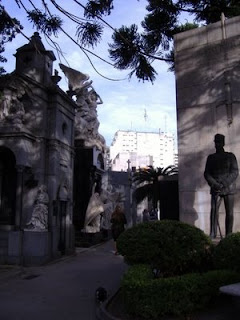 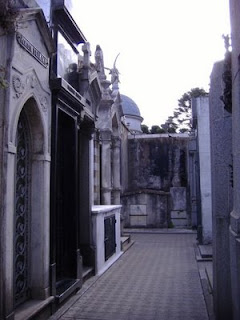 We saw other sights, too, like a massive market selling expensive gifts. We got caught in freezing rain, and sheltered in cafes, and at the end of a knackering day, we finally made it through the wind, rain and dark, to a steak-selling restaurant (Los Portenos). Delicious, but nothing to write home about. Damnit! 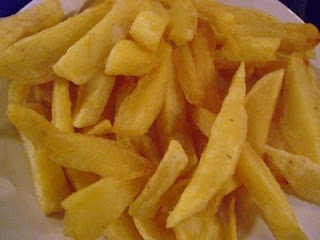 We did enjoy the homemade chips enormously, the steak was tasty and juicy but overcooked, and more malbec (Estancia Mendoza) washed it down a treat. Very warming.

After showering at the hostel, we once again trudged wet, cold streets in search of the smoky, frisson-loaded tango bars of our imagination. We had directions to recommended quirky dens of dance, from friends who had been there, and the hostel was actually in the tango district. So it should have been quite straight forward. But we found nothing!! Nada! All the bars we had the details for seemed to have closed down, and everything else was shut. The streets were silent, apart from a few people who had come out to rummage through that day's bins for goodies. We asked various locals, but no-one could help us find our tango lair. No amazing steak, no sun, no tango – it was time to move on, and head north for warmth.

On the very long way back to the hostel, we kept an eye out for a hidden den or nice bar to warm up in, but didn't see any that were open. So we went to the only thing that was open; a weird cafeteria that had clearly not changed since being very trendy in circa 1982. We ordered a cognac for me and a Tia Maria for Biddy. They took AGES to arrive, and we were being cynical about the staff, who were fiddling about and didn't seem to know what they were doing. About 15 minutes later, Biddy was served the hugest Tia maria I have ever seen, and my absolutely massive glass of cognac arrived with the waiter heating it in a contraption, over a candle flame, and a doily around the base. We felt bad for being so negative about the waiters' apparent confusion, when it was actually just that they had a certain way to serve cognac, and they were making sure it was done properly. All that effort, and each drink only cost about £1.50. They were certainly warming. 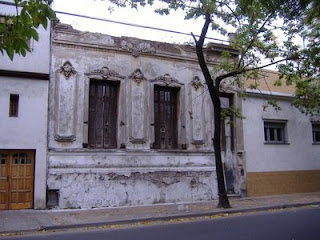