I am brewing some ale. Today, I siphoned it out of the fermentation bin, leaving the velvety sludge of yeast behind. The sludge smelt so incredibly delicious, filling the senses with powerful beery, yeasty, malty fumes, that I couldn't bear to chuck it all away.

I used a couple of dollops in with wholemeal flour, a spoon of malt extract, slosh of fermenting beer, pinch of salt and some milk, to make bread. It was a complete experiment, because I had no idea if the yeast would work well enough to make the bread rise, or what it would taste like. It was a brilliant success! It smelt like a dream bakery from a century ago, as well as a bit of pub carpet (in a good way). Honestly, though, it was such a wonderful smell. Tasted damn good, too! It had a really full flavour that was miraculously similar to the smell.

One slight draw back; my bread had a bitter aftertaste. With butter and jam or cheese, the bitterness wasn't noticeable, but the beery flavour still was. Next time, though, no actual beer, and more malt extract.

The yeast took longer than packet yeast to start working enthusiastically, but after a couple of hours it was really going for it. I kneaded it again, made it into a twisty loaf, left it under cling film to rise again, and then baked it at 180˚C for about 20 - 25 minutes. It came out with a moist and crumby texture, and you know the rest.

I left the lovely, pretty beer loaf on the kitchen surface, and when I went back to take photos, this was all that remained. Which must be an excellent sign. 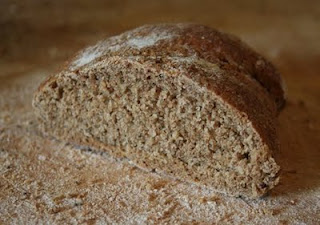 Now, what to do with the rest of the sludge... There's way too much to use just by making another non-bitter loaf. Any ideas?
Posted by Gemma Driver at 1:13 pm

Gemma - You can use this valuable sludge as a manure for your vegetable garden. Mix it with any kind of rich semi-liquid waste material and leave it in the warmth of your kitchen to ferment. When the odour becomes unbearable, you know that it is ready to feed your veggies. However, please make sure that you don't get any splashes on the vegetables themselves, or on your clothes.
Good luck!!
Beerdie

Looks great, I bet it would be excellent with a ploughman's lunch, ooh, super mature cheddar and a pint of Golden Champion... or even a pint of your home-brew!