June spent in France was wonderful; catching up with old friends, enjoying the novelty of the amazing produce, re-acquainting myself with my kitchen and garden, and proper hot summer weather.

When I first arrived, my herbs were being munched by a plague of snails. So I decided to resolve the problem by munching them. Previously, I had been put off by unsuccessful snail-cooking attempts, and there were never that many of them to cook. This time there were dozens and dozens, and I was determined to make them delicious. I had three weeks to purge them (fed only on bread followed by days of nothing at all), before serving them up to friends as a goodbye meal at the end of my stay.

Three weeks of culinary adventures and good times went by. The day of the feast arrived hot and sunny, and I drove my blue banger to the village to get some still-warm baguettes, wine, salad, a massive bunch of parsley and butter. Then, back to my little beauties...

I boiled a huge jam pan of water, rinsed off the snails, shook them to make them retreat into their shells, and winced as I chucked the lot into the boiling water. Job done, the worst bit over. After a few minutes, the snails were draining and cooling and definitely dead. I extracted each one from its shell and removed its twirly gut end, before boiling the meats with herbs and stock veg for 3 hours. The shells were rinsed, boiled in fresh water, and left in the sun to dry.

Meanwhile, I chopped the mountains of garlic and parsley, stirred them into soft butter, and seasoned the mixture with plenty of salt.

Then came a few hours of stuffing each snail back into a shell, each squadged in with a load of the persilade (garlic and parsley butter). 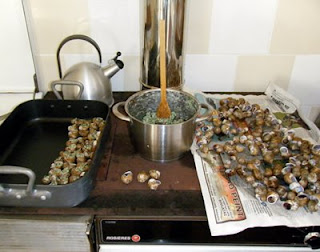 Next, I dressed the table, mixed the salad, opened the wine, and set out nibbles. Once my guests had arrived, and were having aperitifs, I put the snails in a hot oven for 20 minutes. Out they came, sizzling and smelling fantastic. I dished them up at the table and finally found out that my snail adventure had been a success - they were absolutely delicious, and this was confirmed by my guests, who were Dutch, English and French. The Frenchman commented that he hadn't had snails in ages, and it was funny that this time they had been cooked by an English person. The Dutchman had never eaten snails, and was delighted by them. The Englishman had tasted my previous attempts and was relieved that these were not only edible but extremely palatable and moreish. Hmmm even more salt with the butter next time, though, I think. 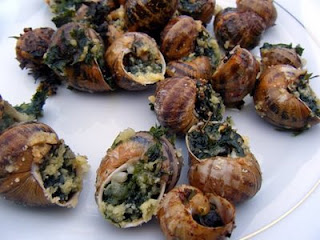 I was thrilled that I had been able to make these slimy creatures tasty at last, and that I had put my snail glut to such extremely good use. All the effort and man hours had been worthwhile. I will definitely be making this a regular pest-control exercise/snail party.
Posted by Gemma Driver at 12:45 am

Wow! I never imagined cooking snails would involve so much work, I thought you would just throw them into a pan with butter, garlic and a splash of wine like I do with shellfish such as clams & mussels - Good work Gemma, I hope your snails come back to eat your veg so you can enjoy eating them again!

It goes to show that so-called free food often comes at a high price...

Hey Gemma what about that beachy head snail feast we had in brighton.....I thought that was a resounding success!