I used to want to marry Giles Coren, but a few incidents recently (nothing to do with editorial hissy fits – I liked them) are making me wonder if he’s not just a bit of a knob. Don’t worry; I would never normally be as unprofessional as to slag people off, but he’s much ruder about most people all the time and his mushrooming ego wouldn’t allow him to take offence anyway.

The main thing that stopped me wanting to marry Giles quite so much was his disdain for Croatian food. IT IS WONDERFUL. He must not have eaten in the right places. That said, I didn’t eat in a single place that wasn’t incredibly good and I wasn’t even trying very hard so I don’t know how he would have managed that.

It’s a fusion of Mediterranean and Eastern European cuisine that revolves around a bountiful and diverse array of fantastic local ingredients – abundant seafood, salt marsh lamb from Pag Island, suckling pig, wild boar, truffles, hot peppers, tomatoes, mushrooms, garlic, potatoes, olive oil, wine and so on. Influences from the west are pizza, risotto and seriously dreamy ice-creams, and from the east comes peka; super-slow-cooked potatoes in olive oil, garlic and herbs, with octopus or meat. And shredded cabbage.

Seriously, Giles, I want to go back just to explore more of the food (although the scenery is dramatically beautiful and varied too).  Try spit-roast suckling pig at a casual roadside eatery! Or barbecued wild sea bass with homemade chips and luscious salad by the sea. Spit-roast lamb at Tamaris in Zadar (on an industrial estate/retail park by a main road, but don’t be put off) is outstanding and comes with THE most delicious peka potatoes. I am not even a potato person but I can’t imagine eating anything more enjoyable than these soft, salty, oily, addictively ambrosial spuds. 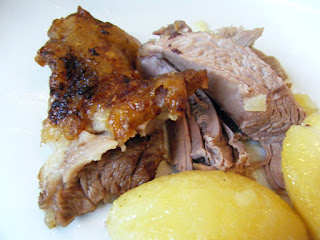 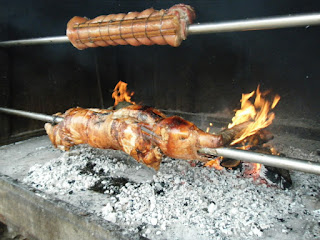 Spit-roasting suckling pig, by the roasdside 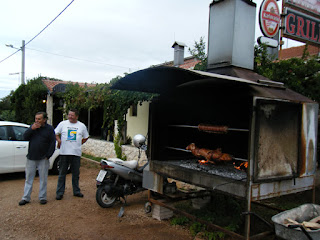 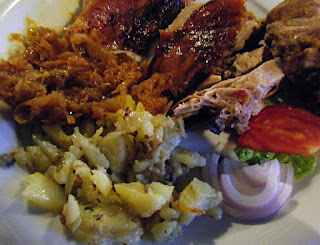 The people were delightful too! Impeccable English everywhere, an eagerness to help Croatian exploration, and not a tiny whisp of the old tourist-foreigner resentment you sometimes sense when abroad was detected from anyone during the 10-day break.

We were given homemade cherry jam by our hosts; offered homemade grappa by other hosts. And the cherry jam hosts came to find us late at night when our sat nav failed to nav, drove us to their favourite restaurant the next night (at 11pm) and carried on being just as kind and friendly when they discovered we were renting their apartment in order to attend a big rave in their neighbourhood (Dimensions Festival).

A recent Croatian National Tourist Board's press release claimed that Croatia is ‘The ultimate foodie destination’. Interesting angle, because even apart from Coren’s erroneous views their cuisine has barely been covered by any foreign press and often – utterly inexplicably – it is criticised. But unlike lots of tourist board manifestos, the Croatians are making an entirely accurate claim (well, maybe ‘an’ ultimate foodie destination, anyway) and I bet pretty soon it will be ‘discovered’ as the biggest new thing in foodie travel. 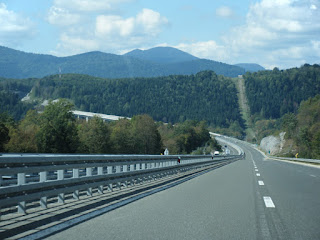 Driving back to Trieste Airport through Croatia and Slovenia -
breathtaking scenery (and wild wolves).


We stayed in one of lovely Marina and Ivan's apartments near Pula and the great top floor apartment with large sea view balcony belonging to Anita and Neven in Zadar.