Try this excellent value celebratory meal at The Montagu (Hyatt Regency Hotel, London), until 6th June. For £20, you can indulge in a two-course lunch and £25 will get you three courses, including half a bottle of wine. Evening prices for the same menu are £22 and £27.

The enchanting choices - complete with info about when they were originally served, in Buckingham Palace, Sandringham House and The Royal Yacht Britannia - are all French classics and relatively simple dishes. I had heard the queen does not like garlic, and her taste for delicate flavours seem to be reflected here.

We chose Crêpe au crabe and Oeufs Pochés à l’Ecossaise to start. The crêpe was sweet and light, the ‘eggs’ were actually one poached quail’s egg perched on a really tasty spherical salmon cake and covered in a seriously good frappé of hollandaise, dotted with pink peppercorns – it was thoroughly delicious.

Next, we went for Côteletts d'Agneau à la Menthe avec Les Legumes and Chicken poached in Champagne – both were cooked to absolute perfection, with the lamb chops browned and crispy on the outside and pink within, and the chicken wonderfully moist and only just white with its gentle, creamy wine sauce and crispy skin. 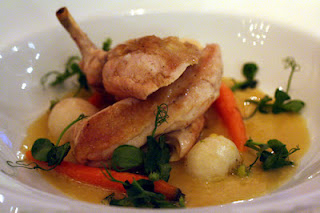 For dessert, we had a fantastic and generously portioned tarte tatin and an unusually good selection of cheeses. I wished we’d also had room to try the Soufflé Glacé aux Framboises (served at the State Banquet in honour of King Khaled of Saudi Arabia on 9 June 1981, no less). I wished it even more when I saw the pretty dessert being served to someone else, but we were replete with royal dishes by that time.

The regal surroundings of The Monatgu add to the sense of occasion for enjoying The Jubilee Set Menu, with the great space of the restaurant itself, dramatic pieces of art (including from the Saatchi Gallery) and the green of Portland Place outside.

Chef Mervyn Wycherley created The Jubilee Set Menu. He worked for the Royal Household between 1972 and 1995 and travelled all over the world with the Royal Family.

Remember, the Jubilee Menu only runs until 6th June…