Go there if: You're young, trendy, hungry and want some tasty, filling, inexpensive nosh.

Conclusion: Not bad but disappointing; restaurant reliant on image and decor more than food.

La Choza is proving to be an extremely popular new restaurant in Brighton. It's unlikely you'll get a table as this small venue is permanently packed. Instead they have a system of taking your mobile number and calling you when a table becomes available, and they're keen to stress that they won't be offended if you find somewhere else to eat in the meantime.

I missed out the first time I tried to try La Choza as my friend and I were too hungry to wait and we went to The Chili Pickle for lunch instead (for the £13 thali) followed by 2 for 1 caipirinhas at chain restaurant Las Iguanas (it was Christmas Eve). On my second visit to La Choza for lunch a few days later there still wasn't room for me and I still couldn't wait to eat, but this time I got take-away. I was dying to try the food and wouldn't be back in Brighton for a while.

I chose a burrito with the pulled pork and hot salsa (£6). As well as your chosen filling, the burritos come stuffed with green rice, cheese, sour cream and refried beans.

The helpful and cheerful waiter recommended the Modelo Especial Mexican beer (£3.50), which I enjoyed while waiting for my lunch. I had to stand in the cramped space between the door and the little bar, and watch seated diners enjoying their meals while being jostled by constant new arrivals trying to get a table.

The decor is very bright and funky, featuring lots of sugar skulls (Mexican painted skulls) and Mexican-style fabrics. The clientelle seemed to be predominantly young and female. I think everyone there apart from me was under 30. 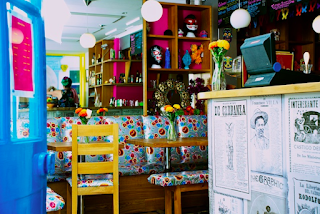 My burrito arrived and I took it outside to eat standing up next to a table that I put my beer on. The soft burrito was large and generously filled but mainly with rice. The rice was nice and the burrito was tasty, but it was lacking - lacking in care for the way it was filled (sections of individual ingredients clumped together so it was impossible to get a mouthful of everything, and I had to work my way through grated cold cheese followed by sour cream and just tonnes of rice), lacking in pork, lacking in salsa, lacking in punchy Mexican flavour. Some of the quite hard chunks of 'pulled' pork were too big for one mouthful but were difficult to bite in two.

Much is made of the slow-cooked element of La Choza's fare, but I struggled to taste the sparse pork. I could tell that effort had been made with the rice but the sheer quantity of it took over everything else. The refried beans clearly hadn't been made to an authentic recipe. They seemed to just be a bean purée. Why take such care with the meat and rice but not bother with the beans? Especially as the menu is so limited; every item should be the best it can be. That is what I assumed I would experience after reading about the restaurant's pride in the meats it serves and seeing the small menu. I was disappointed.

I'm sorry to say that I think the popularity of La Choza is down to its trendy image and the aesthetic appeal of its interior and not to its food. Hence the youthful customer base. Yes, I only tried one dish but I think you can judge a Mexican by its burritos. It would still be nice to eat in there with the bright colours and filling, tasty food, but it could be really fantastic and it just isn't. The crampedness would even add positively to the street food feel if the food was as good as it could be. But as it is, I would rather have fajitas in Las Iguanas, with plenty of juicy meat, salsa, guacamole and enough space to dine comfortably.

How disappointing, style over substance seems to be the pitfall of many restaurants, especially in trendy places like B right on.

But isn't that what people go for? I mean, for a lot of people I eat with the look of the place is more important than the food!

How much did it cost?

Good point - meant to include prices and will now add them in. Thank-you, reader x

Excellent detailed review, I will perhaps look elsewhere for a real mexican meal!